The Raspberry Pi 4 Model B is finally here, a $35 device that packs a lot of useful technology on a single circuit board you can hold in your hand. It might even be your next budget computer, assuming you can stomach some of the trade-offs enthusiasts have identified in their early testing.

This tiny tool that powers plenty of people’s clever hacking projects—including dorm room parties—gets a lot of great upgrades for its fourth-generation release. On paper, the specs are impressive: a 1.5 GHz, quad-core, ARM Cortex-A72 processor; up to 4GB of memory (bumping the price to $55); Gigabit Ethernet; wireless-ac; and the ability to push 60 frames per second to a 4K display (or 30 frames per second to two connected 4K displays).

That’s all well and good on paper, but what do these changes actually mean? Here’s what we know so far:

If you’ve played with a Raspberry Pi previously—especially if you’ve been trying to crank as much performance out of it as possible—you’ve probably encountered some overheating issues. The Raspberry Pi 4 is no different; in fact, it’s hotter. As Gareth Halfacree writes for Medium:

“...after just a few minutes, the entire board feels warm to the touch. Start loading it heavily and that warmth becomes uncomfortable; while it’s still entirely possible to use the board without extra cooling, those looking to put one in a case will find active cooling is required to avoid thermal throttling.” 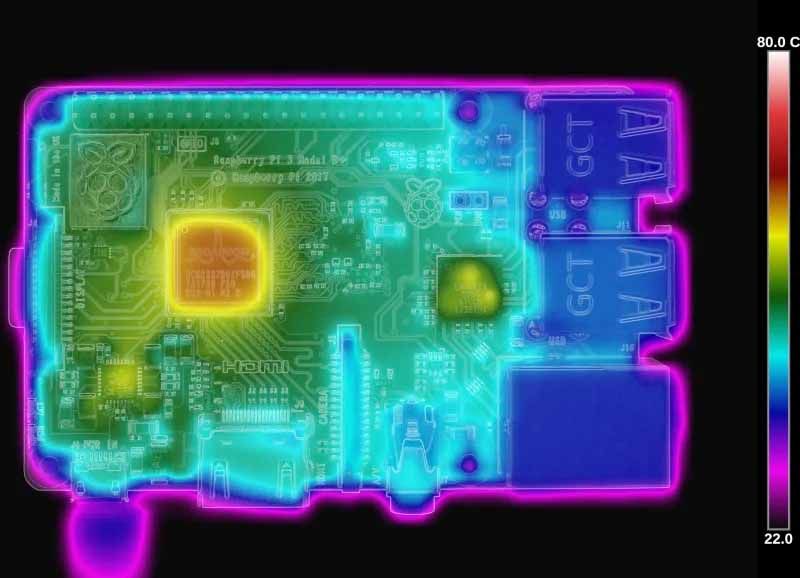 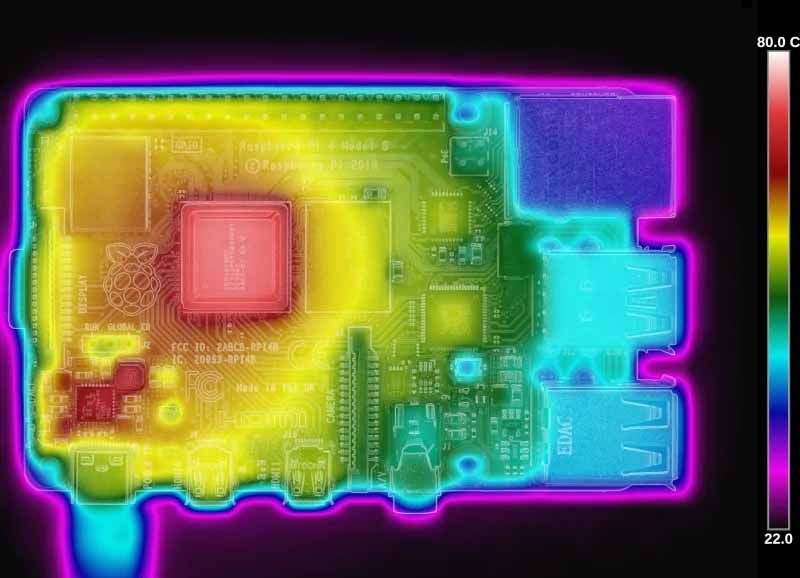 The good news? Even if it's running at its top speeds 24 hours a day, every single day of the year, the Raspberry Pi 4 should only cost you around $3 extra to operate.

It blows my mind to think that a tiny single-board computer can process 16.5 million pixels like that, but don’t let this spec fool you. The Raspberry Pi 4 might be able to handle a 4K display, but that doesn’t mean that it can run 4K video very well—or even 1080p video. From Avram Piltch over at Tom’s Hardware:

“While surfing the web, looking at still images and just enjoying all the extra screen real estate of 4K is great, video playback is the Raspberry Pi 4’s Achille’s heel, at least as of this writing. Whether we were attempting to stream a 4K video or use a downloaded file, we never got a smooth, workable 4K experience, either in Raspbian Buster or LibreElec, an OS that runs the Kodi media player. Several H.264 encoded videos, including Tears of Steel, did not play at all or showed as a jumble of colors. Even the sample jellyfish videos that the folks at Kodi recommended for my testing appeared as still pictures with no movement. Clearly, there’s a lot of optimization that still needs to be done both on the OS and software side to make the Raspberry Pi 4 capable of playing 4K video.

Unfortunately, even streaming 1080p YouTube videos is a challenge at this point. Running at 1080p resolution, a full-screen video trailer for Stranger Things showed obvious jerkiness. However, the playback was smooth when I watched the same clip in a smaller window. The same problem occurred, even when I dropped the stream’s resolution down to 480p.

Playing offline 1080p videos works well, provided your screen is at 1920 x 1080 or lower resolution. A downloaded trailer of Avenger’s Endgame was perfectly smooth when I watched it using the VLC player.”

How well does the Raspberry Pi 4 handle common tasks?

It’s useful to run a ton of synthetic tests to compare devices, but it difficult to translate these kinds of scores what it might feel like to use a device for everyday tasks: video encoding, image manipulation, web browsing, et cetera.

In addition to those thermal tests from earlier, Halfacree also ran the Raspberry Pi 4 through some real-world testing to give you a better sense of what it’s like to actually use one (and to give context to its hardware upgrades).

Though he didn’t specify the size of the file he was working with, which I’d be interested to know, he ran a quick file compression test and compared the Raspberry 4 versus every other version of a Raspberry Pi that’s existed (if I’m correct). As you might expect, the latest and greatest version of the single-board computer smokes its predecessors: 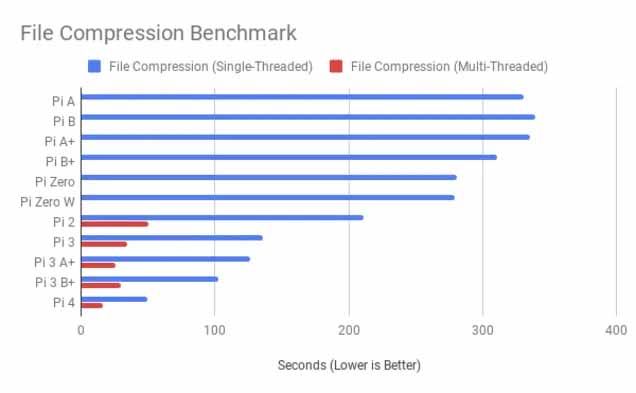 When Halfacree ran the Raspberry Pi 4 through an image-editing test, the exact kind of action you might perform using your $35–$55 tiny PC, the performance improvements weren’t quite as extreme. What’s more telling from his testing—if you know your Raspberry Pi specs—is how much of a performance boost you get when you stick an adequate amount of memory in your device, at least if you’re planning to work with high-resolution files.

While the Raspberry Pi 4's 1GB version is still solid compared to older versions of the Raspberry Pi, you might as well go big and splurge for the 4GB version if you’re intending to keep this device around for some time. It never hurts to have a little extra memory to work with, especially if you’re looking to run more than a few browser tabs at once, Piltch writes:

“Keeping my eye on Gnome System Monitor, I noticed that, even with just one or two tabs open, I was using more than 1GB of RAM. However, on the Pi 4 with 4GB of RAM, I had no problem running over 15 tabs at once, switching back and forth between them.”

Bumping up to 4GB also helps the Raspberry Pi 4 crush Speedometer 2.0, a synthetic test that simulates web application responsiveness (in other words, what kind of an experience you might have with sites like Google Docs). 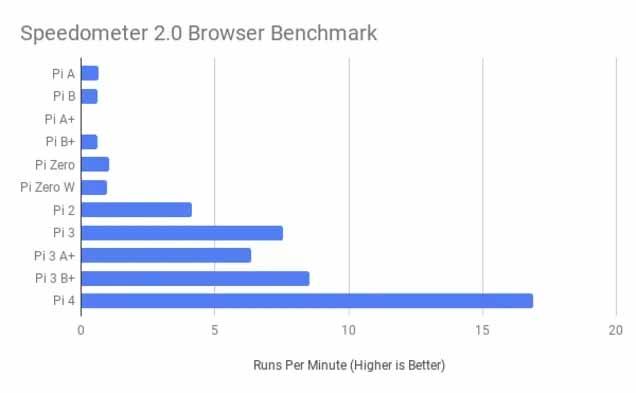 Another interesting tidbit I caught in Halfacree’s testing was that the Raspberry Pi 4 has fixed some annoying issues that inhibited the performance of components that should have been a lot faster on previous Raspberry Pi computers. Case in point: Gigabit Ethernet.

Similarly, the USB speeds on the Raspberry Pi 4 have seen a huge boost, thanks to the removal of the aforementioned USB bottleneck and an upgrade from slower USB 2.0 ports to USB 3.0. Now that the Raspberry Pi 4 is able to let USB 3.0 shine, it does—at least, when Halfacree connected up to an SSD and ran some read and write tests.

Netflix loses 'The Office' after 2020 to NBCUniversal's service

NASA's Dragonfly mission is sending an eight-rotor drone to Titan